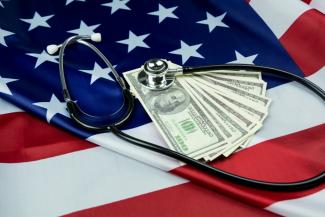 I saw an ad on streaming TV recently for health insurance. It claimed that the average price people who bought health insurance on the exchange were paying was $10/month. This was not my personal experience. This ad made me a little mad. I bought health insurance through healthcare.gov for two years when I first started my business. The premiums for two people were not $10/month. Six years ago, they were $1,200 a month for a high deductible plan that covered two people in their mid 30s. I gave up on the plan when I realized that I was going to spend more than $20,000 on health care before the insurance covered anything (premiums plus one person’s deductible). Today I reluctantly spend a similar amount for a small group plan (around $600/mo/person). With deductible, it comes to about $11,000/year before the insurance covers anything… I digress.

The ad intrigued me. How was I paying so much more than the average person getting insurance through healthcare.gov? I forgot about it, but recently had a meeting to a review a client’s financial plan to answer the question: “Could I move up my retirement date from 65 to 60?” He had a fair amount of cash sitting in the bank that he had earmarked for an RV and travel, but then the thought occurred to him, what if I skip the RV and use that money to support myself between now and 65? Can I retire now instead? So, we were looking at the numbers and discussing his budget. He had allocated $700/month to insurance premiums. I remembered that ad and thought about what his income would look like if he quit work now. He had already made a fair amount in income this year, but if he spent his cash, he could keep his income very low for the next few years while he waited to get to age 65 when he could switch to Medicare.

His numbers worked to retire now if he was OK with spending his cash. I googled something like health insurance premium credits and landed on an article at healthcare.gov discussing premium credits.

Reading though the chart it looks like if his income is less than $19,000, he will get a large tax credit subsidy that will substantially reduce or eliminate his premium cost. He needs about $6,000/month, or $72,000/year. He has enough cash to cover most of that from now to 65, but if his income is $0, he won’t qualify for the healthcare.gov plans and premium credits, though he might qualify for Medicaid. He does not want Medicaid because he thinks his Dr. might not participate. So, we need him to have some income each year. The plan is to withdraw about $20,000/year from his IRA so that he has some taxable income to keep him out of Medicaid, but low enough that he should qualify for a premium credit.

Healthcare.gov now has a handy tool to review plan options and estimate premium credits based on estimated income: https://www.healthcare.gov/see-plans/#/

He will be retiring next month and will pay out of pocket for health care premiums for the remainder of the year. Because he worked half the year, his income is too high to qualify for a premium credit, but he should qualify for the credit next year. So, he will be able to retire at 60, five years early, and spend less in total over the next 5 years because of this premium credit that he had not originally anticipated.

Now, this was dependent on having the cash. Most people have most or all of their retirement assets in the 401(k) or IRA. Had that been the case, he still might have been able to accomplish this if we could find a way to get him the income he needed. I have seen people use this same strategy and pull money from a HELOC (home equity line of credit) for a few years. Then when they reached 65 and switched to Medicare, they withdrew more from their IRA to pay off the HELOC. I’ve also seen someone sell their paid for home and rent. Another client quit his stressful sales job and worked part time at home depot for a couple years to make up the short fall.

If you are asking “Can I afford to retire?” and you’d like some help thinking through your situation, we’re happy to talk through it with you. Sometimes we can help identify something you may have missed. Sometimes it may be a confirmation of what you thought. Either way it is often helpful to get a second set of eyes to review your financial situation. We’ve seen a bunch of people in your situation before and we’ve seen how different decisions play out.

At Threadgill Financial, we review retirement planning and give feedback at no cost.

We’re happy to visit with you whether you work with us or not.